On "Wealth Inequality In America"

There’s been a viral video that’s been circulating the internet recently called Wealth Inequality In America. It’s actually been published for quite some time, but it’s crossed my plane of vision a few times in the past few days. While I don’t believe that the content is wrong (in fact, it is actually quite right), I believe that the point the video makes and how it makes it are both misleading. The video tends to imply some nefarious plot to keep the poor down. But in reality, all it is showing is the natural tendency for any system of sufficient complexity to trend towards having a power-law distribution.

Want to see something shocking? Let’s run the same analysis against the top 50,000 websites on the internet, comparing the number of visitors each gets (as provided by Quantcast). When we run the numbers, we get some really interesting data points. In total, there were about 12 billion site-vistiors (since each visitor can be counted multiple times by different sites, that makes sense). Let’s take a look at a graph of this data: 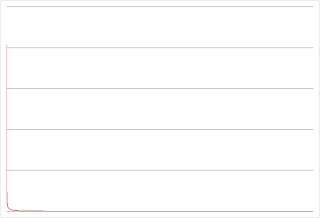 Now at first glance, it doesn’t look like much. It could be anything. But let’s zoom in a bit… 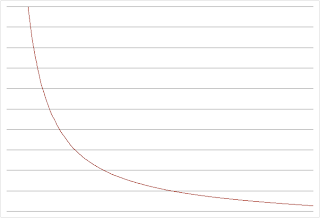 These numbers look shockingly like the ones from the video. But there’s a very important difference. I’ve cut out a very large number of small sites, and only focused on the top 50k sites. If I included all sites (or the top 1 million sites, for example), the exact same thing would happen. The numbers may change slightly, but the shape and the effect will stay the same…

Power law graphs have a really interesting property: they have a fractal quality. That means that if you pick any sub-range of a graph, it will have the same basic shape as the main graph. Why is that important? Because once we realize that this is a power law graph, we don’t need all the information. We know instantly that this sub-graph will have the same shape and behavior as the full graph.

So what does this tell us about the economy? The fact that the economy fits a power law graph shows us that it’s operating properly. There’s no conspiracy by the richest 1% to keep the other 99% down. Just like there’s no conspiracy by the top 1% of websites to keep the other 99% down. The trends and actualities of the distribution of wealth is natural.

We could conjecture for years about why this happens, and likely none of us would be right. But the point I want to make is that we need to get past this notion of fair and balanced. What makes a stable equilibrium? The video points out several “ideal distributions”, but without explaining why or how they should be ideal. What are the forces that are supposed to keep income evenly distributed (or at least linearly distributed)?

However there is another way of looking at it. Since the entire graph is fractal, that means that everyone on the list can get a significant gain from a small increase in position. Going from a position at 80% to 81% gives a 6% return. Going from 20% to 21% (bottom 20% up one slot) gives a 2.5% return. So what does that mean?

This power-law model favors those who try to advance themselves. By moving up a fairly small amount you can get good gains. The harder it is to move up (meaning that there are fewer people infront of you to pass), the more the gains that are available. It promotes growth by rewarding it significantly. It doesn’t punish those in low positions, but instead it doesn’t reward people who don’t want to move up (advance)… Is that right? It depends on your priorities and sense of school-yard justice…

If you want to know more about power laws and networks, I HIGHLY recommend the book Linked: How Everything Is Connected to Everything Else and What It Means.