On Equality, Sexism and an Even Hand

Over the past 3 or 4 days there’s been a huge upturn on Twitter and in the community bashing Web and PHP Magazine for giving away T-Shirts (and tweeting a photo) with a double-entendre at PHPUK. A lot of banter going back and forth from those like Cal Evans who went so far as to pledge never to go to another conference sponsored by the magazine, to Stefan Koopmanschap who basically thinks it’s no big deal. (note: these are my interpretations from their posts). I think the whole thing has grown WAY out of proportion…

Here’s the offending image that kicked it all off: 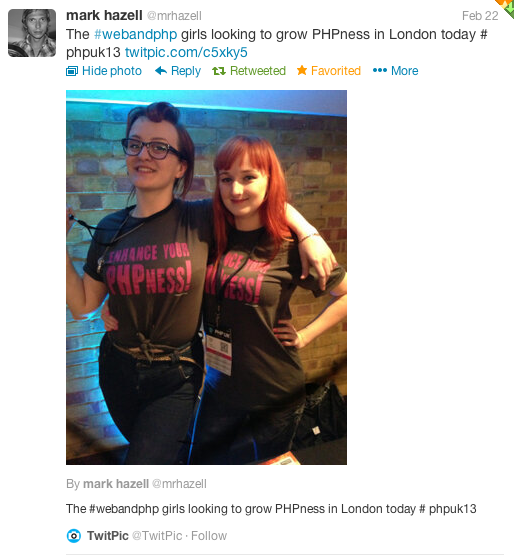 And then you have the women who appeared in the photo who replied to the whole mess today trying to justify it all (and I think they made a pretty good justification).

My opinion here is just give it up already. A joke like that is not sexism. We are all (mostly) adults here. We don’t need to throw a hissy-fit every time someone makes a joke. We shouldn’t assume (as many people did) that just because there are two attractive women wearing a shirt that has a double-entendre on it, that they are models hired to promote the product. Even some of the prominent women in this industry have claimed it (some of them are women that I have a HUGE deal of respect for).

To me, this entire thing shows how sexist the community is. Not because some company saw fit to make T-Shirts sporting a sexually charged slogan (which really wasn’t overtly sexual). But because of the outrage it caused.

Face it, sex is a part of life. The more we try to oppress it and hide it, the more it creates a gap between men and women. It’s a part of our culture. If it makes someone uncomfortable (due to religious or any other reason), then that person should remove themselves from that situation. If this T-Shirt offends you, then don’t go to the booth and get one.

To demonstrate my point: I am *honestly* offended by help vampires. I’m sure you’ve seen them at conferences and user-group meetings. They are the types of people who just keep harassing you asking question after question after question expecting you to do something for them. I’m not talking about someone who has a question, that’s fine. I’m talking about the people who expect you to debug their application for them in production while at a conference (and when that’s done, expect you to do something else).

I am offended, partially because I feel it shows a complete lack of respect for me and my time. What do I do when I am offended in these cases? Do I flip out and name names? No. I find a way out of the situation, and I move to a better one. That’s it. If you’re offended or uncomfortable with something, then leave. That’s normal.

Before you get all upset and start accusing me of thinking that SmutOnRails was ok, stop and think about it rationally for a second.

OFFENDING SOMEONE IS NOT THE SAME AS BEING OFFENSIVE…

Being offensive is where the majority of a community would be offended (even the non-vocal ones) and it was intentionally designed to offend or put down people. Just because you were offended doesn’t mean that something was offensive.

We should ABSOLUTELY put rules in place to prevent intentional discrimination or offensive content. But we shouldn’t put rules on trying to prevent things that people will find offensive.

Don’t get me wrong, I don’t think it’s a good thing at all if people are offended or slighted or whatever at conferences. I do think effort needs to be made to make it more welcoming and easier for everyone to get along. However, I don’t think rules against anything that may offend people will help (the opposite actually). I also don’t think that getting up in arms over something minor like a double-entendre on a T-Shirt does anyone any good. All it does is dilute the real problems…

There’s a perfect parallel in the US: Freedom of Speech. In the US, you are free to talk about just about anything you want. You can share your opinions irrespective of if others will find them offensive. However, what’s not legal is hate speech and harassment. It’s often a subjective and fine line between them (and it is very context sensitive), but the point is that there is a distinction between something that offends someone else, and being deliberately offensive / harassing. 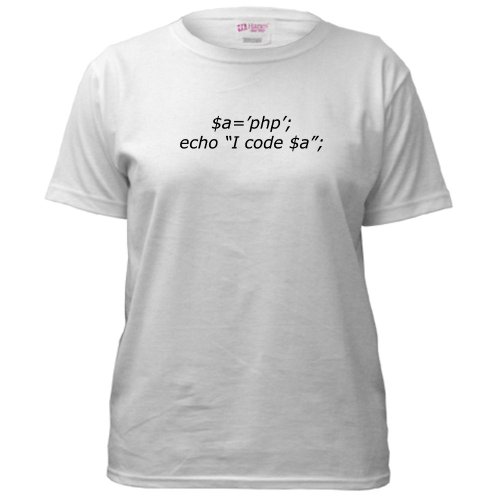 Is this a problem? Well, what about the fact that the writing on the t-shirt tends to draw a person’s eye to the wearer’s chest? Should we tell all vendors that they are not allowed to have logos or sayings on the chest of their shirts because it will make it tough for women (because their chest will be stared at by all those men wanting to read the shirt)?
COME ON, be real. Women have a tough time getting into technology for one reason: That we treat them differently (and by we, I include everyone, including women). Sure, there are assholes out there that try to put women down, and make it harder for them (for whatever reason). But guess what? There are also assholes out there that try to put PHP developers down because it’s not Ruby or whatever language of fancy (names aside)…

Unfortunately it’s a double-edged sword. Targeting women (for encouragement or discouragement, both are just as guilty) implies that they need help. It implies that it’s a tough world out there and they need hand holding to get through it. It re-enforces the concept that they couldn’t do it themselves without a team of help. But on the other hand, it is a tough world out there. Having a group that can provide support is necessary to make it easier for women to get into tech.

Here’s my experience as a male. Tech is a very easy community to get into as a “low member” (entry level). It’s extremely difficult to get to an advanced level. It requires years of commitment and thousands of hours of hard work under adverse conditions. I don’t know a single person in a leadership position (community or professional) who just got there one day. They put in a LOT of work. If we need a support group to help women get from the entry level to a leadership level, then that same group can help non-women do the same thing.

Now, if someone is being personally (or impersonally) harassed, the person doing the harassment needs to be dealt with. Notice that I said someone. Not a woman. Not a “protected category”. But anyone. We shouldn’t tolerate harassment targeted ANYONE. The recent blow up of women coming forward admitting that they have been harassed at conferences is sad. Not because they are women. But because harassment is happening. The fact that they are women should never enter into the picture. Harassment is harassment, end of story…

As far as the T-Shirt at hand, it’s not harassment. It’s not a shirt that I would wear in a professional context (to my office), but at the same time I would have no problem wearing it to my parent’s house. This blow up in the community and the amount of fury flowing around on both sides sickens me… If you don’t like it, fine. If you are offended by it, fine. But to publicly berate it is another thing.

Instead, let’s deal with our problems like adults. Let’s not treat women differently. Let’s simply treat all developers as developers. It’s a hard enough game as it is without making conscious or unconscious distinctions between players. The only people that are hurt by distinctions are everyone…

So can we get over it already? Let’s get past this childish finger pointing, and focus on getting shit done. And when real problems happen, and when someone is being harassed, then come out guns blazing to protect the community. But until that happens, let’s just relax and grow up.

PS: If anything above offends you, please let me know in the comments or in an email. I did intend to offend people who believe that women are different. But I hope that I didn’t offend any innocent bystanders…

Edit: I have received some feedback about the remark that I made about PHP Women above. I’d like to clarify that a bit. I think the PHP Women group is outstanding, and I’m a huge supporter of it. They do a fantastic job all around. And they do help men as well. However, my point (which I still do believe) is that such a group will always create a partial divide in the community, from the simple position that it creates a distinction that “women have a group, but men don’t” or whatever. In an ideal world, such a group wouldn’t need to exist. But we aren’t in an ideal world, so the group does far more good than bad (FAR more).